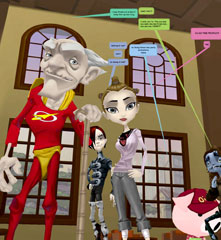 IT SOUNDED like a brilliant idea. Google, the internet giant, would bring 3-D virtual worlds to the masses by making them accessible through a web browser. Millions of people log into virtual worlds such as World of Warcraft and Second Life every day, but they require special software and their complexity can be daunting to newcomers. So Google’s launch of Lively, in July, seemed to have great potential. But in the weeks since it opened its virtual doors, Lively has remained surprisingly lifeless, hosting a dwindling number of users and prompting a string of negative reviews.

Lively is a simple environment, amounting to little more than a series of 3-D chat rooms. To enter, you must first download and install a plug-in for your web-browser. You can then choose from a list of rooms, the most popular of which are (inevitably) themed around sex and dating. And although some popular rooms—“Love Sweet Love” and “Sexy Babes Club”—have had thousands of visitors, the number quickly drops into the double digits further down the list. Hardly anyone is using Lively.Why has it been such a flop? “There’s nothing to do in Lively if you’re not talking to someone,” says Greg Lastowka, an expert on virtual worlds at Rutgers School of Law in New Jersey. Second Life, he says, offers “commerce and creativity”, and Club Penguin (a popular virtual world for children, owned by Disney) has lots of built-in games.

Not all users are disappointed. Kathleen Schrock, an early adopter of Lively, signed up after using Second Life for nearly two years. Unlike many people, she appreciates its simplicity. “It’s so easy to use,” she says, making it much more approachable for anyone put off by what she calls “the hurdle of Second Life”—the time it takes to get started.

Google denies that it is beaten yet. Mark Young, a member of the Lively team, admits that it has a lot of problems: crashes, log-in difficulties and hard-to-read text. When asked what he hopes to tweak, he says: “Everything. Much of the user interface is not as complete or polished as planned in designs.” He promises a round of updates soon.

Article Link (The Economist)
Posted by sarjoun at 6:47 AM