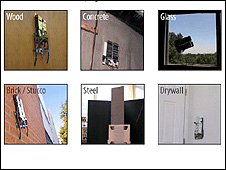 Developed by a team in SRI's Mobile Robotics and Transducers Programme, the machines are about the size of a remote-controlled car and have caterpillar tracks similar to those on toy tanks.

Inside these tracks are materials with electro-adhesive properties, which mean that when a current is applied, the tracks are attracted to the wall, preventing the robots from falling off.

"The robot carries with it positive and negative charges, and when the walls sees these charges it automatically generates the opposite charge. The robot can then clamp onto those charges.

The technology, called compliant electroadhesion, uses a very small amount of power and the robots can crawl at a speed of about one body length per second.

The team is now working on a way to apply their technology to more insect-like robots, to mirror the way that creatures such as flies are able to walk upside-down.

This will be done by putting electro-adhesive pads on the robot feet.

"We often think of electrostatic forces as very weak - but if you get very close, you can get very strong forces from this," Mr Prahlad added.

Article Link (BBC, with video)
Posted by sarjoun at 5:54 AM