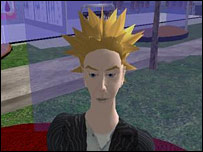 "To develop an MMORPG costs anywhere in the region of
$40m to $50m," he says. "If it's successful, you're going to continue
to develop content for it all through its lifetime, so some of these
games can live on for four, five, six years.

It's estimated that the market is already worth more than £500m ($1bn) a year.

Massively Multiplayer Online Role-Playing Games (MMORPG) participants pay for the software plus a monthly subscription to stay in the online world. One, World of Warcraft, has more than eight million paying members who generated more than $470m last year.