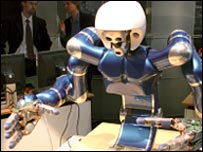 The race to create more human-like robots stepped up
a gear this week as scientists in Spain set about building an
artificial cerebellum. The end-game of the two-year project is to implant the
man-made cerebellum in a robot to make movements and interaction with
humans more natural.

Sensopac brings together electronic engineers,
physicists and neuroscientists from a range of universities including
Edinburgh, Israel and Paris with groups such as the German Aerospace
Centre. It has 6.5m euros of funding from the European Commission.

Its target is to incorporate the cerebellum into a robot designed by the German Aerospace Centre in two year's time.

The work at the University of Granada is concentrating
on the design of microchips that incorporate a full neuronal system,
emulating the way the cerebellum interacts with the human nervous
system.

Another European research project - dubbed Feelix
Growing - has been given 2.3m euros to develop robots that can learn
from humans and respond socially and emotionally.
Article Link (BBC)