Pay Up, Kid, or Your Igloo Melts 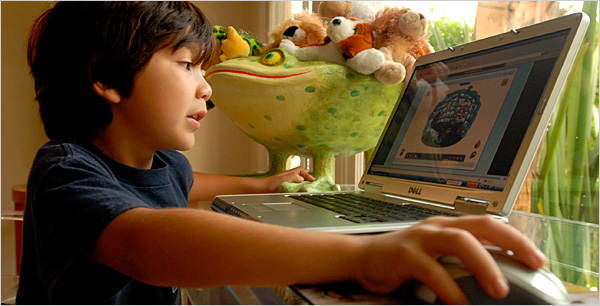 LIKE many 10-year-olds, Laila Rodriquez adores stuffed animals, but
when she asked her parents for a particular stuffed cow, cat, duck and
dog she had an ulterior motive — the toys come with an access code to
an online game that allows her to take care of virtual “pets” (one for
each stuffed toy), to cook for them and to furnish their rooms.

“I’d like to have 10 pets, because once you get 10 you can get an
exclusive bed,” Laila explained while playing the game, Webkinz, at
home here one afternoon after school last week.

The “exclusive
bed” is as pixelated as the pets, but at least Laila’s parents have
four real stuffed toys to show for the $60 they spent on the game.
Laila also just discovered another Web site, subeta.org, which charges $20 for an “angelic potion” and other “virtual thingies,” as Laila put it.

Her 7-year-old brother, Jared, wants to be a paid member of Club Penguin.com,
the popular Web site for children. That would cost his parents $5.95 a
month and enable him to amass virtual knickknacks for his virtual
penguin and the virtual igloo it lives in.

But Jared’s and
Laila’s father, Hubert Rodriquez, 43, has ruled out buying toys he
can’t touch. “You pay real money to get virtual use,” he said. “There
doesn’t seem to be any value in that.”

Posted by Opportunity Finder at 10:03 AM