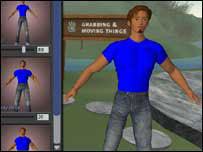 A virtual character, or avatar, for all the virtual
worlds in which people play is the goal of a joint project between IBM
and Linden Lab.

The computer giant and the creator of Second Life are working on universal avatars that can travel between worlds.

The project aims to open up virtual worlds by introducing open tools that work with any online environment.

The project started by IBM and Linden Lab aims to create
a universal character creation system so people only have to create a
digital double once.

While the character's appearance may change depending on
where it is taken, its basic characteristics, such as looks and
underlying personal data, would be retained.

Initially the partners will concentrate on creating a system that lets people move between worlds.

Later will come the universal character creation system that lets people create a single avatar to venture into online worlds.

The partnership was announced prior to the start of the
Virtual Worlds conference taking place in San Jose, California, from
10-11 October.

Virtual worlds are rapidly becoming hugely popular. When
the first Virtual Worlds conference took place in early 2006 only nine
such cyberspaces were widely known. In 2007 more than 30 will be on
show at the Virtual Worlds meeting.
Article Link (BBC)